The SecurityPlus Alarm and Remote Start System is a high-tech 2-way paging security system that will provide a high level of protection for your vehicle. This system includes a 2-way rechargeable LCD pager which will alert you of any kind of intrusion or vandalism at the vehicle as well as the engine running after remote

The SecurityPlus Alarm and Remote Start System is a high-tech 2-way paging security system that will provide a high level of protection for your vehicle. This system includes a 2-way rechargeable LCD pager which will alert you of any kind of intrusion or vandalism at the vehicle as well as the engine running after remote start. The system includes the latest in vehicle security technology such as a dual-stage shock sensor, starter kill output and a 25 Watt high-power single-tone siren. The interactive display on the paging remote confirms all commands almost instantly with easy-to-understand icons. It alerts the user to alarm triggers by beeping and vibrating when out of audible range of the siren. The LCD screen will also turn red when an alarm trigger is reported to the user. This system works with manual transmission vehicles as well as diesel engines.

Protect Your Vehicle from Theft and Vandalism, and Remote Start the Engine with the Push of a Button 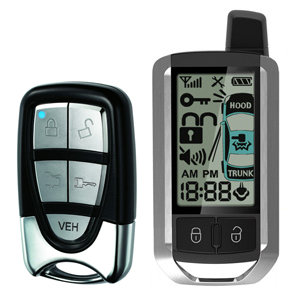 Thousands of cars get broken into, stolen or vandalized every year. Don’t become part of this statistic. Protect your vehicle with the SecurityPlus SP-502 system. The SP-502 is a top-of-the-line system that does it all. It provides an excellent layer of protection over your vehicle with a full-blown security system as well as adding the convenience of a keyless entry and remote engine start system. The SP-502 is a 2-Way system that uses a rechargeable LCD paging transmitter and a smaller 4-button “sidekick” transmitter operating on an FM/FM frequency at a range of up to 3500 ft. depending on your surrounding environment.

Advantages of Using the SP-502 System 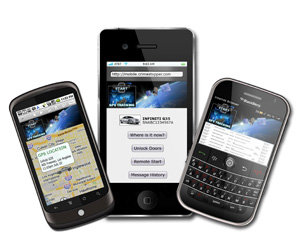 A security system can be the only thing that stands in between your car and the thief who plans to steal it and make your day go horribly wrong. The SP-502 system comes with an adjustable dual-stage shock sensor that detects various types of impacts to the vehicle. The shock sensor is able to distinguish between a light vibration (loud exhaust or sound system) and an aggressive intrusion attempt. For light vibrations, the shock sensor will set the alarm into “warning mode” which will lightly sound off the siren with a few chirps to warn the intruder. If a heavy impact, the sensor will set off the alarm and fully sound the system’s siren.

The transmitters themselves also have a second vehicle option which allows you to control another RS4-G4 system from the same remote. If you have an RS4-G4 system in one vehicle and a second RS4-G4 system in another vehicle, you can use the VEH button on the bottom of the remote to switch back a forth between the vehicles and control both systems. No more searching for a different set of keys to get into your other car, simply press and hold the VEH button and the LED on the top of the remote will switch colors to indicate which vehicle you are operating. It’s that simple.

Range is one of the biggest advantages of the SP-502. The external antenna receiver will give you the extended range you need to remote start your vehicle from inside your home or office, lock or unlock your doors and even open the trunk from a distance of up to 3500 ft. depending on the surrounding environment. The LCD remote will receive the page-back confirmation that the command was sent, received and completed giving you peace-of-mind that your vehicle is safe and secure.

The SP-502’s 2-Way LCD remote gives audible and visual confirmation of arm, disarm, trunk pop and remote start functions with a series of beeps and vibrations. It will also display it on-screen through various easy-to-read icons. The LCD remote will also illuminate red if the security system is tripped or if the shock sensor picks up vibration to warn you of an intrusion attempt. The LCD remote also uses an on-board rechargeable lithium battery, so you no longer have to worry about changing out the old AAA batteries. Simply plug in provided charger to the remote and let it sit.

Both the LCD pager and sidekick remote have a second vehicle option which allows you to control another SP-502 system from the same remote. If you have an SP-502 system in one vehicle and a second SP-502 system in another vehicle, you can use the VEH button on the transmitters to switch back a forth between the vehicles and control both systems. No more searching for a different set of keys to get into your other car, simply press and hold the VEH button and the remote will switch between vehicle-one and vehicle-two, It’s that simple. 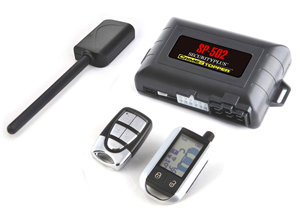 The SP-502’s remote start feature will turn on your climate controls when remote start is activated, effectively warming or cooling the interior temperature to make it comfortable for you when you enter into your vehicle. With the help of a separate data interface module, your heated seats and rear defrosters can also be activated during remote start as well. Simply leave your climate controls turned to the ON position and set at the levels you prefer and when you activate the remote start, they will turn on with the system and get your vehicle warm or cooled to the comfort level you want.

The SP-502 also has the ability to control power sliding doors or the rear hatch for anyone who owns a minivan or SUV using its on-board auxiliary channels. Also, with the help of a separate window-rollup module, the SP-502 can also use these extra aux channels to roll the vehicle windows up and down as well.

Please note: the data interface module and window modules are sold as separate accessories and features and compatibility of these modules depend on the year, make and model of the vehicle.

Track and Start Your Vehicle from Your Smartphone

As we all know technology is changing and Smartphone’s are now becoming the new trend. The SP-502 system can be interfaced with our MS-1 tracking system which gives you the ability to unlock the doors, start the engine and track your vehicle using your Smartphone or from your PC. The tracking interface is browser based, very easy-to-use and is compatible with any type of Smartphone whether it’s an iPhone, Android or Blackberry. The MS-1 can also be configured to notify you if the SP-502 security system is triggered. Once the alarm is activated, the MS-1 will send you a text message or email letting you know of the intrusion or theft. The MS-1 has a yearly subscription fee of $39.99 and comes pre-loaded with 500 messages or “tracks” to unlock, start, and track your vehicle.